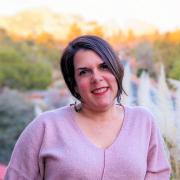 My name is Su, and I’ve been living in Calabria, Italy, for three months. In some ways, it feels much longer, and yet I’ve only just scratched the surface in terms of exploring this amazing and ancient country. I’m fortunate enough to be self-employed as an intuitive business coach and content creator, which means I can work anywhere. So how did I end up a digital nomad in Italy living five minutes from the Ionian Sea? Here’s my story…

I fell in love with language from an early age. My family is from Louisiana, which has French roots. I remember poring over my mom’s Berlitz French book as a kid. When I hit high school, I took three years of French. Then went on to major in it in college.  I even met my now ex-husband in French class and traveled to France with him. We had a son and took him to Paris. Provence. Points in between. And I could see myself living there one day…until I visited Italy in 2015

There was something magical and different about Italy. Despite my having nearly no Italian language skills, people were so kind and patient, and I was able to communicate.

After that, I visited Italy five more times. A plan began to cement in my mind.

Flying My Own Nest

I began thinking about what life would be like after my son, Max, graduated from high school in 2022. Being divorced, I didn’t have anything keeping me in San Diego, other than some amazing friends. So I began to toy with the idea of moving to Italy.

Right in the middle of my research phase to figure out where specifically I wanted to move, the pandemic happened. Since I couldn’t visit to find my future home, I immersed myself in Frances Mayes’ newly-released book, Always Italy. I bookmarked any city that met my requirements:

Finally, in June 2021, I was able to visit Italy and start my search in earnest. It took three trips before I landed in a sleepy little beach town on the east side of the toe of Italy’s boot.

Not only did I find a town and a house to rent, I even found a kindred spirit in Courtney, who had moved to the area nearly a year before. We instantly clicked, and have been sources of support and inspiration for one another.

My son flew the nest in August, and I was right behind him, my cats in tow, on the way to Italy!

Italy changes you. Lest you think that living in Italy is all prosecco and pasta, let me tell you that life can be challenging, particularly in such a small and slow part of the country. But yes, there is DEFINITELY prosecco and pasta in my life, and it’s better and cheaper than it was in the States!

I’ve realized that I’m the outsider here, that Italy is never going to change its ways for me, so it’s ME that must adapt. I’m thrown out of my comfort zone every damn day, and you know what? I love every minute.

What You Can Expect from Me

Courtney and I decided to join forces to make Sacred Earth a powerful resource on all things Italy, whether you’re looking for a travel guide or want to know more about moving to Italy as a digital nomad.

Courtney kept pointing out that I had so much knowledge about what it takes to move here (I’m a research freak) and said I should share my wisdom, so that’s what I’ll be doing here. I’ll talk about the nitty-gritty of moving here and the mountain of documents and applications you’ll need to fill out to get settled. And I’ll also share my experiences traveling through Italy (often with Courtney and Luca!).

Out of that conversation came a brand new business coaching service I launched to help digital nomads get started in Italy. I’m by no means an expert or coach on the immigration process, but I can help you if you’re interested in finding your path to making money while living la dolce vita!

In the meantime, I invite you to check out some of the posts I’ve written on my own travel blog, The Unexplorer: